I can’t find my (ancient, battered) copy of SPIDERWEB FOR TWO, by Elizabeth Enright, which is frustrating, because I want to quote from it. I’ll have to settle for summary instead. I think it’s from the chapter titled “A Pocketful of Gold.” Oliver and Randy are trying to solve one of the story’s mysterious clues; Randy is sick in bed, so Oliver is on his own. Along the way, he meets Miss Bishop, and they have a conversation about, among other things, gardening. Miss Bishop says, “Purslane is delicious in a salad,” and Oliver is stunned to hear this, because to him, purslane has always been just a bothersome weed.

The second I read that passage, I wanted to taste purslane. It wasn’t until I was an adult–in fact, just a few years ago–that I finally got my chance when I spotted some at a farmer’s market. Miss Bishop was right. It was delicious, with a faint lemon flavor and a wonderful crisp texture due to the thickness of its leaves. (It’s also full of nutrients, if you like that sort of thing.)

A few weeks ago, I spotted some tiny weedy sprouts of purslane in the flower bed. About a dozen of them, barely bigger than my thumb. 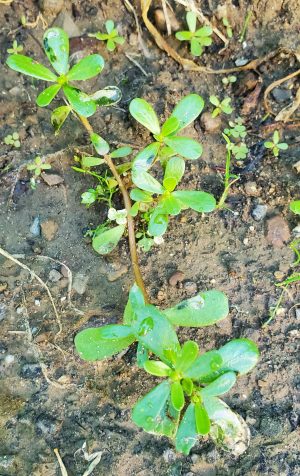 They were dug up and given their own little bed, and now, three weeks later–WOW, are they happy! 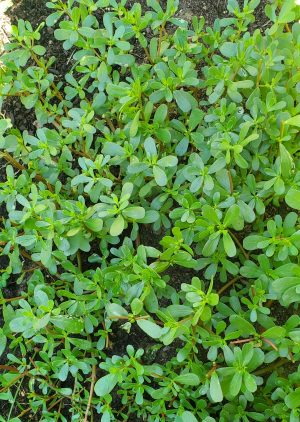 My lovely crop of purslane wouldn’t exist if I hadn’t read that passage in SPIDERWEB FOR TWO (some fifty years ago!). For me, the connection is about more than just a plant. It’s about curiosity, and being open to new experiences, and paying attention, and maybe even a weed by any other name….

A good children’s book has that kind of power: to make connections that last a lifetime.

With salad on the side. 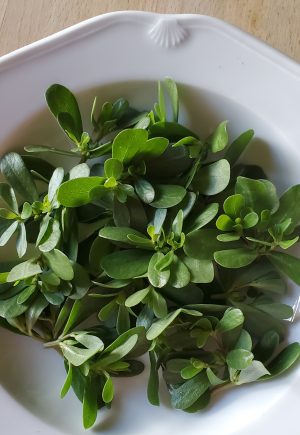