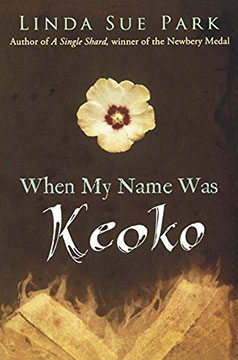 An excerpt from When My Name Was Keoko

Abuji reads out loud from the newspaper: “By order of the Emperor, all Koreans are to be graciously allowed to take Japanese names.“

“Graciously allowed . . .“ Uncle says. His voice is shaking, he’s so mad. “How dare they twist the words! Why can’t they at least be honest—we are being forced to take Japanese names!”

Abuji reads some more to himself, then says, “We must all go to the police station in the next week to register.”

Uncle curses and pounds his fist against the wall.

My name, Tae-yul, means “great warmth.” My grandfather—Abuji’s father chose it. It’s one of our traditions for the grandfather to do the naming. He’d taken it seriously, Omoni once told me; he’d wanted a name that would bring me good fortune.

For Sun-hee, too—“girl of brightness.” A different name? I can’t imagine it. I look at Sun-hee and I can tell she’s thinking the same thing.

“Those who do not register will be arrested,” Abuji says.

“Let them! Let them arrest me! They will have my body but not my soul—my name is my soul!” Uncle’s face is red as a pepper.

Abuji holds up his hand. “Such talk is useless. It must be done. But let me think a while.”

We leave him alone. I’m last out of the room, but I don’t close the door. I watch him take a few books from the cupboard and turn the pages.

Then he gets up again and fetches paper and pencil. Writes something on the paper, looks at it, writes some more. What’s he doing?

At last he calls us all back into the room. Sun-hee and I sit on the floor, but Uncle stays standing, his arms crossed. Stubborn. Abuji waits a few moments, until Uncle seems calmer and uncrosses his arms.

“Tae-yul, Sun-hee, you know that the Kim clan is a large and important one,” Abuji says. “Long ago, all Kims lived in the same part of Korea, in the mountains. Choosing the word for gold as their name shows what a strong clan they were. Gold was only for kings.”

He picks up the sheet of paper from the table and points at it. “I have chosen our Japanese name. It will be Kaneyama. “Yama‟ means “mountain‟ in Japanese, and “ka-ne‟ means “gold.‟ So the name will honor our family history.”

He turns to Uncle. “They will not know this. But we will.”

Excerpt from Keeping Score by Linda Sue Park (Clarion Books, 2002) ISBN 978-0440419440. Copyright © Linda Sue Park. This excerpt may be copied for classroom or library use but may not be reprinted or resold for commercial purposes.