buy the paperback
buy the audio book
buy the e-book
back to books: novels

When My Name Was Keoko

Sun-hee and her older brother, Tae-yul, live in Korea with their parents. Because Korea is under Japanese occupation, the children study Japanese and speak it at school. Their own language, their flag, the folktales Uncle tells them—even their names—are all part of the Korean culture that is now forbidden.

When World War II comes to Korea, Sun-hee is surprised that the Japanese expect their Korean subjects to fight on their side. But the greatest shock of all comes when Tae-yul enlists in the Japanese army in an attempt to protect Uncle, who is suspected of aiding the Korean resistance.

Sun-hee stays behind, entrusted with the life-and-death secrets of a family at war.

Read an excerpt from When My Name Was Keoko. 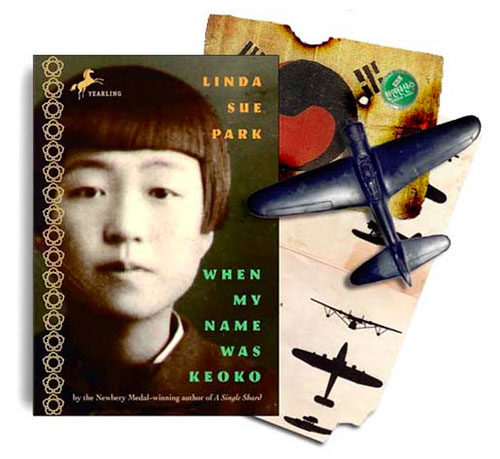 “Living in Korea in the 1940s was difficult because the Japanese, who occupied the country, seemed determined to obliterate Korean culture and to impose their own on its residents. Sun-hee and her older brother, Tae-yul, still go to school every day, but lessons now consist of lectures and recitations designed to glorify Japan. To add to their unhappiness, everyone, adults and children alike, must give up their Korean names and take new Japanese ones. Sun-hee, now called Keoko, and Tae-yul, newly named Nobuo, tell the story in alternating narrative voices. They describe the hardships their family is forced to face as Japan becomes enmeshed in World War II and detail their individual struggles to understand what is happening. Tension mounts as Uncle, working with the Korean resistance movement, goes into hiding, and Tae-yul takes a drastic step that he feels is necessary to protect the family. What is outstanding is the insight Park gives into the complex minds of these young people. Each of them reacts to the events in different ways—Sun-hee takes refuge in writing while Tae-yul throws his energies into physical work. Yet in both cases they develop subtle plans to resist the enemy. Like the Rose of Sharon tree, symbol of Korea, which the family pots and hides in their shed until their country is free, Sun-hee and Tae-yul endure and grow. This beautifully crafted and moving novel joins a small but growing body of literature, such as Haemi Balgassi’s Peacebound Trains (Clarion, 1996) and Sook Nyul Choi’s The Year of Impossible Goodbyes (Houghton, 1991), that expands readers’ understanding of this period.”

“A brother and sister alternate as narrators in Newbery Medalist Park’s well-constructed novel, which takes place from 1940-1945 in Japanese-occupied Korea. The Japanese government forbids the Korean language to be spoken and the country’s flag to be flown, and even forces Korean families like Tae-yul and Sun-hee’s to change their names (Sun-hee becomes Keoko). Through the use of the shifting narrators, Park subtly points up the differences between male and female roles in Korean society; and the father’s process of choosing the family’s Japanese name speaks volumes about his strength and intelligence. As the war intensifies, each family member asserts his or her individuality, from Sun-hee, who continues to keep a journal after a soldier calls it "a crime against our Divine Emperor," to her uncle, who prints a revolutionary newspaper in hiding, to Tae-yul, who joins the Japanese army to avoid helping the military police capture his uncle only to be chosen as a kamikaze pilot. ... telling details provide a clear picture of Sun-hee and Tae-yul and their world. Readers will come away with an appreciation of this period of history and likely a greater interest in learning more about it.”

“The author of three novels set in different periods of Korean history now turns to WWII for the story of a brother and sister and their lives with their parents and uncle. Telling their story in alternating voices, the two siblings offer complementary and sometimes different versions of events. Sun-hee, in the last year of elementary school in 1940, loves studying and is an obedient daughter while older brother Tae-yul loves speed and machines. Their uncle is a source of concern because he publishes an underground, anti-Japanese newspaper. The Japanese had conquered Korea in 1910 and as the war looms their demands on the Koreans intensify. Food grows scarcer and the Koreans, long forbidden to study their own culture and language, now must take Japanese names. Thus Sun-hee becomes Keoko. In one memorable passage, Sun-hee misunderstands an oblique warning from her Japanese friend and assumes that her uncle's life is in danger. He flees, never to be seen again as the war and the post-war communist government in the north keep them apart. This beautifully written story captures these events through the eyes of a very likable young girl. In her voice, readers share the joys of playing cat’s cradle, eating popcorn, and tasting American chewing gum for the first time. Through Tae-yul’s they experience his gritty determination to join a kamikaze unit in order to protect his family from the suspicious Japanese. There is food for thought when Sun-hee’s father tells her that “they burn the paper—not the words” when referring to the Japanese soldiers who destroy her diary. There have been relatively few stories for young readers that are set in Asia during WWII. This powerful and riveting tale of one close-knit, proud Korean family movingly addresses life-and-death issues of courage and collaboration, injustice, and death-defying determination in the face of totalitarian oppression.”

The paperback of When My Name Was Keoko is available from your favorite independent bookseller, your public library, or these online retailers:

The audio book of When My Name Was Keoko is available from your favorite independent bookseller, your public library, or from these online retailers:

The e-book of When My Name Was Keoko is available from your public library or these online retailers: