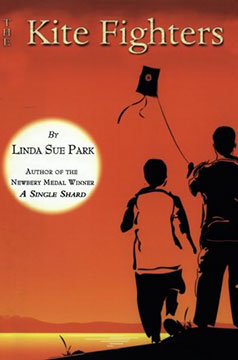 An excerpt from The Kite Fighters

In Chapter Three, 11-year-old Young-sup learns how to make a kite from his older brother Kee-sup.

The work was painstaking from the very start. Kee-sup required him to measure precisely the bamboo sticks. The first time, Young-sup was careless with the measuring string. He pulled it taut for one stick, but less so for the second.

After he had cut the sticks he found that they were uneven; Kee-sup made him measure and cut them again. If the knife slipped the merest hair, it was enough to make the sticks uneven. “Cut them again,” Kee-sup ordered.

Time after time, Young-sup had to clench his teeth so the words of frustration would not escape. But as the days went by, the kite’s construction gained his interest. He began to see that the flying walked invisibly beside every step of the making.

“I know that you can see the wind and I can’t,” Kee-sup said jokingly, “but we both know what it’s like—how strong it can be. The frame must be just as strong.” Young-sup nodded. He knew the thrill of seeing how light sticks of bamboo and mere paper could be the wind’s equal.

The angles and corners where the sticks met received critical attention. Kee-sup showed him how these were the kite’s most vulnerable points. If time and care were not taken on the joints, the first stress of the wind against the paper could misalign them. The smashed grains of cooked rice they used for glue were messy and seemed to get everywhere. Often Young-sup found that his very fingertips were stuck together. Even the simple bridle was a lesson. “The points where you attach the line must be placed just so,” Kee-sup explained. “If it is fixed to one side or the other–even just a little–the balance will be wrong. The line will pull one side more than the other.”

“I felt that with my first kite,” Young-sup admitted.

Bit by bit the frame was completed. Then Kee-sup turned his attention to the paper. Young-sup was delighted as the work progressed. Kee-sup was making the pattern of stripes subtly different from his own tiger kite, so that the kites looked similar but not the same.

Excerpt from Keeping Score by Linda Sue Park (Clarion Books, 2000) ISBN 978-0395940419. Copyright © Linda Sue Park. This excerpt may be copied for classroom or library use but may not be reprinted or resold for commercial purposes.