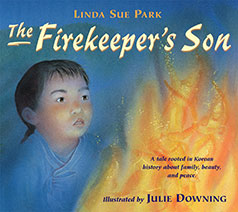 buy the paperback
buy the e-book
back to books: picture books

In Korea in the early 1800s, news from the countryside reached the king by means of signal fires. On one mountaintop after another, a fire was lit when all was well. If the king did not see a fire, that meant trouble, and he would send out his army.

Linda Sue Park’s first picture book for Clarion is about Sang-hee, son of the village firekeeper. When his father is unable to light the fire one night, young Sang-hee must take his place. Sang-hee knows how important it is for the fire to be lit—but he wishes that he could see soldiers … just once.

Mountains, firelight and shadow, and Sunhee’s struggle with a hard choice are rendered in radiant paintings, which tell their own story of a turning point in a child’s life.

“Newbery Medalist Park brings an accomplished novelist's sensibility to this suspenseful picture book set in 19th-century Korea, fully developing her characters despite the abbreviated format. Every night, Sang-hee's father climbs the mountain in their seaside village and lights a fire, to signal that no enemies have landed. Firekeepers on adjacent mountains pass on the message, which eventually reaches the king's palace. Sang-hee pines for a little excitement and wishes that even one of the king's soldiers would ride out ("I could show him the beach. Where to catch the best fish.... After that he might teach me a little about sword-fighting"). One evening, when his father is injured, Sang-hee takes over his task. Tempted to draw the soldiers, and then almost unable to carry out his mission because he drops a coal and another burns out, Sang-hee kindles the fire at last, and takes pride in being, as his father says, "part of the king's guard just as the soldiers are." Assured, empathetic storytelling involves readers in Sang-hee's inner conflict. Downing (Mozart, Tonight) amplifies the tension with dramatically composed watercolor-and-pastel illustrations. While Sang-hee debates lighting the fire, his eyes nearly fill the spread, transfixed on the coal he holds and reflecting its hot orange glow. Elsewhere, sparks fly off the coal, metamorphosing into bright metal points on the armor of the soldiers he imagines. The notion of duty to others versus personal longing adds depth to an already fascinating snippet of history.”

“Centuries ago-and through the 19th century-the lighting of fires apprised the king of the safety of his country. Darkness warned of trouble. When Sang-hee's father is injured, Sang-hee must climb the mountain with the brass pot of hot coals to start the fire that signals all is well. The first night Sang-hee contemplates whether or not he should light the fire—after all, if he does not, the soldiers will come and he would like to see the soldiers just once. In the end both Sang-hee and his father are proud that Sang-hee has become a trustworthy fire-starter as his father and grandfather were before him. Even in the darkness the watercolor illustrations glow with vibrancy. The cover illustration is especially striking: Sang-hee bright-eyed at the orange-and-yellow fire flickering before him. A lovely telling that will bring readers back to read or hear this story one more time.”

The paperback of The Firekeeper's Son is available from your favorite independent bookseller, your public library, or these online retailers:

The e-book of The Firekeeper's Son is available from your public library or these online retailers: