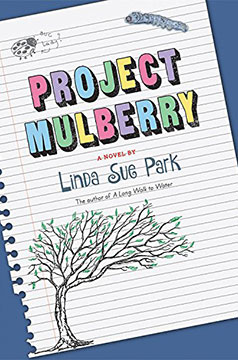 An excerpt from Project Mulberry

Patrick and I became friends because of a vegetable.

Not just any vegetable. A cabbage.

And not just any old cabbage. A Korean pickled cabbage. Which isn‟t a round cabbage like Peter Rabbit would eat, but a longer, leafier kind. It gets cut up and salted and packed in big jars with lots of garlic, green onions, and hot red pepper, and then it‟s called kimchee. Kimchee is really spicy. Koreans eat it for breakfast, lunch, and dinner.

I don’t like kimchee. My mom says that when I was little, I used to eat it. She’d rinse off the spiciness and give me a bite or two. When I got to be six or seven years old, she stopped rinsing it. Most Korean mothers do that, and most Korean kids keep eating it. Not me. I hated the spiciness, and I still do. My mom keeps telling me I should eat it because it‟s refreshing.

But what’s so refreshing about having your mouth on fire?

My family used to tease me about not liking kimchee. My dad said maybe it meant I wasn’t really Korean. “We should have your DNA tested,” he’d tell me. The seven-year-old snotbrain named Kenny who lives with us—otherwise known as my little brother—would wave big pieces in front of me and threaten to force me to eat them. Another thing about kimchee is, it has a really strong smell. Even though it‟s stored in jars, you can still smell it, right through the jar and the refrigerator door. It sends out these feelers through the whole house.

Three years ago, when I was in fourth grade, we were living in Chicago. I’d made friends with a girl named Sarah.

The first time she came over to play, she stopped dead in the entryway and said, “Eww! What’s that smell?” I’d never really noticed it. Smells are funny that way—they can sort of disappear if you live with them all the time. But Sarah was so grossed out that I was really embarrassed.

The exact same thing happened again a few weeks later, this time with two friends, a boy named Michael and his sister, Lily. They both stopped dead in their tracks and grabbed their noses.

Then they insisted that we play outside because they couldn’t stand the smell.

I asked my mom to stop making kimchee, but she told me I was being unreasonable. When we moved to Plainfield two years ago, our new apartment didn’t smell like kimchee—for about half a day. Then my mom unpacked some groceries, including a big jar of kimchee. Sigh.
I met Patrick on our second day in Plainfield, a Saturday morning. Actually, I saw him on the first day; he was hanging around on his front steps three doors down, watching the movers. Not just him but his three brothers as well. I noticed him right away, not because of the way he looked—brown hair in a normal boy-haircut, a few freckles, a gap between his front teeth that predicted braces in his future—but because
he seemed to be the closest to my age. The other three boys were little, younger even
than Kenny.

On the second day, I took a break from unpacking and went out to have a good
look at the neighborhood. There they were again, the four boys, like they’d never
moved off the steps. This time there was a girl with them, too, but she was a lot older.
Patrick came down the steps and said hello and told me his name. I said hi back and
told him mine.

“Can I see inside your house?” he asked.

As we started down the sidewalk, we were suddenly surrounded by his three
younger brothers. “Can we come, too?” “Patrick, we wanna see.” “Patrick, what’s her
name?” Patrick stopped walking. “Claire!” he yelled. The girl on the steps looked up
from picking at her nails. “Yeah?” she said. “Make them stay with you,” Patrick said. “I
can’t go barging in with all of them.” “I’m leaving soon. Michelle is picking me up to go
to the mall.” “Well, that means I’ll be looking after them then. So you take them for
now.” Claire stood up. “YOU BEEN ICKY!” she yelled. At least, that was what it
sounded like to me, but later I learned that their names were Hugh, Ben, and Nicholas,
and that Hugh was a year older than Ben and Nicky, who were twins, and that they
usually got called “Hugh-Ben-Nicky” all in one breath. “Aw—” “Patrick—” “Pleeeeease
can we—” “Hugh, let‟s go see if there are any cookies,” Claire said.

Hugh let go of Patrick’s arm and turned back toward their house. Ben and Nicky
trotted after him. Patrick grinned at me. “If you get Hugh to do something, you’ve got all three of them,” he explained.

As we walked in the door of my house, Patrick tilted his head and sniffed. I braced myself for his reaction.

“Whoa,” he said. “What’s that? It smells great!” That was the beginning of Patrick’s love affair with kimchee. Whenever he eats dinner with us, my mom puts one bowl of kimchee on the table for the family and gives Patrick a whole private bowl for himself. He eats it in huge mouthfuls, sometimes without even adding any rice. I can hardly stand to watch him.

Maybe he‟s the one who needs his DNA tested.

“Goats.” “No.” “Sheep.” “No.” “Swine.” “Wine?” Patrick and I were sitting on the floor of my room. He was reading aloud from a pamphlet. I was sewing up one of the cushions I keep on my bed. It had split the week before when we had a pillow fight, and the stuffing was falling out.

Patrick snorted. “Not wine, ssswine. You think they‟d let us anywhere near alcohol? Anyway, we‟ve already decided to do an animal project. Wine is not an animal.” Patrick and I had just joined the Wiggle Club. Its real name is the Work-Grow-Give-Live! Club (Plainfield Chapter), which means its initials are WGGL, which is why all the kids call it Wiggle.

The Wiggle Club is supposed to teach kids about farming. Or at least it started out like that, a long time ago.

It used to be for kids who lived on farms, far apart from each other, and it gave
them a way to get together. These days, hardly anyone lives on farms; most of the land has been taken over by giant companies. Then the Wiggle clubs got started in cities and suburbs, so now we have one in Plainfield.

He’s the guy who runs the Wiggle Club, and he owns one of the only small farms left near Plainfield.

In January, club members sign up to do a project. They work on it for months, and the best ones get chosen to be exhibited at the state fair in August. Now it was March, and everyone else in the club had been working on their projects for a couple of months. Patrick and I signed up only a week ago, so we were going to have to work fast.

We’d just attended our first meeting, where we decided we’d do an Animal
Husbandry project.

“Mr. Maxwell?” Patrick had waved his hand. “Why is it called Animal
Husbandry? Are we only allowed to work with male animals?” Mr. Maxwell laughed.

“No, Patrick, we work with both male and female animals. It’s called husbandry
because it‟s raising animals, taking care of them—” Patrick interrupted him. “Then why isn’t it called Animal Wifery? Wives take care of stuff—I mean, like raising babies—more than husbands do, don’t they?” Patrick isn’t a rude person, but he really gets into things sometimes, and his ideas sort of pop out of him like he doesn’t have any control over them. His question made Mr. Maxwell pause a second. “Hmm. I think maybe it’s because the word “husband” has another meaning, one that not many people use anymore. It means to guard or watch over—like if someone’s resting, we say they’re “husbanding their strength.” Patrick thought it over. He said, “Okay, I get it. But wouldn’t it be fairer just to call it Animal Parentry?” That made Mr. Maxwell laugh again. “That would be fairer. Maybe you could start a campaign to change it. In the  meantime—” He handed Patrick a Wiggle pamphlet on Animal Husbandry projects.

Patrick began reading it right away. He loves to read. He goes to the library all the time, and if he reads something interesting, he absolutely has to tell me about it. Once, when he was reading late at night about crows, he got so excited about how smart they are—they can learn to imitate sounds like car engines or dogs barking, he told me afterward—that he forgot how late it was and called me. My dad answered the phone and yelled at him. So now when Patrick’s excited like that, he sends me an e-mail instead.

Wiggle meetings are held in the community recreation building a few blocks away from where I live. When the meeting ended, we walked to my house. We went up to my room, and that was when Patrick started reading the pamphlet out loud to me.

Patrick and I went through the whole list of animals. It was discouraging. Most of them were big farm animals, and the rest were ordinary pets—dogs, cats, hamsters. We couldn’t pick dogs or cats because the townhouses we live in don’t allow pets that aren’t in cages.

“We could do a hamster project,” Patrick said doubtfully.

“Bo-o-o-rring,” I said. I needed one more piece of thread to finish sewing up the
cushion’s seam. I licked the end of the thread, held up the needle, and took a deep
breath. I always want to thread a needle on my first try—it’s a thing with me. I poked
the thread at the needle’s eye.

Excerpt from Project Mulberry by Linda Sue Park (Clarion Books, 2005) ISBN 978-0618477869. Copyright © Linda Sue Park. This excerpt may be copied for classroom or library use but may not be reprinted or resold for commercial purposes.