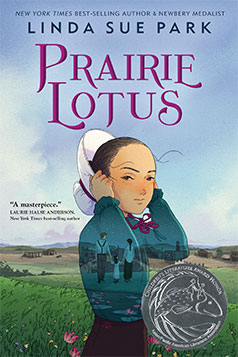 buy the hardcover now
back to books: novels

Recommended in “The 20 Best Gifts for Tweens in 2022,” Ellen Lee and Wirecutter Staff, Wirecutter, The New York Times, 14 November 2022

Prairie Lotus is a powerful, touching, multilayered book about a girl determined to fit in and realize her dreams: getting an education, becoming a dressmaker in her father’s shop, and making at least one friend. Acclaimed, award-winning author Linda Sue Park has placed a young half-Asian girl, Hanna, in a small town in America’s heartland, in 1880. Hanna’s adjustment to her new surroundings, which primarily means negotiating the townspeople’s almost unanimous prejudice against Asians, is at the heart of the story. Narrated by Hanna, the novel has poignant moments yet sparkles with humor, introducing a captivating heroine whose wry, observant voice will resonate with readers.

“I have always admired the subtle power and gentle clarity of Linda Sue Park’s writing. Even when dealing with truly sensitive subject matter, she always manages to bring out the basic humanity in her characters in ways that make her work accessible to readers of all ages. Prairie Lotus is no exception. If anything, this may be her most ambitious and best book yet. It deals with a theme—the development of the West— familiar to fans of Laura Ingalls Wilder. However, quite unlike Wilder’s books, her non-European characters are neither stereotypes nor peripheral to the story. Rather than picturing the hard struggle to settle a “frontier,” the book deals with relations between people of many backgrounds—European American, Native American and Asian American—as seen through the eyes of her beautifully realized main character, whose mixed ancestry never holds her back. It’s a vivid picture of a setting, Dakota Territory, and a period, the 1880s, which has been the focus of countless westerns. Yet because of Park’s empathy, understanding of the complexity of the coming together of cultures, and wonderful ability to create memorable characters, the readers of her story will see that time and place in an entirely different, more complex, and more realistic way.”

“Fans of the Little House books will find many of the small satisfactions of Laura's stories...here in abundance. Park brings new depth to these well-trodden tales, though, as she renders visible both the xenophobia of the town's white residents, which ranges in expression from microaggressions to full-out assault, and Hanna's fight to overcome it with empathy and dignity.... Remarkable.”

“Strongly reminiscent of Laura Ingalls Wilder’s novels in its evocative, detailed depictions of daily frontier life....[Hanna's] painful experiences, including microaggressions, exclusion, and assault, feel true to the time and place, and Park respectfully renders Hanna’s interactions with Ihanktonwan women. An absorbing, accessible introduction to a troubled chapter of American history."

“In her latest middle-grade historical-fiction masterpiece, Park conjures the resourceful and industrious spirit of America’s westward expansion without ignoring the ugly veneer of racism....An incredible and much-needed addition to the historical-fiction canon.”

“Park’s novel is clearly in conversation with [Laura Ingalls Wilder's Little House books], from Hanna’s friendlier interactions with, and more thoughtful views about, members of the Ihanktonwan tribe to racist attitudes among LaForge’s townspeople, who object to Hanna’s presence in the school and blame her after a local man assaults her. But this novel stands on its own, with a vividly drawn protagonist in self-reliant Hanna.”

“…captivating…The parallels to the Little House series are deliberate—and at times delicious…For Little House fans, novels such as Prairie Lotus…expand Wilder's fictional terrain in ways that are not only deeply satisfying but crucial to our national identity. Prairie Lotus is an independent work. But those who read both Wilder and Park might find that the experience also broadens their understanding of what books can do: how they speak to one another across generations, how they animate us to find stories of our own.”

The hardcover of Prairie Lotus is available from your favorite independent bookseller, your public library, or these online retailers: 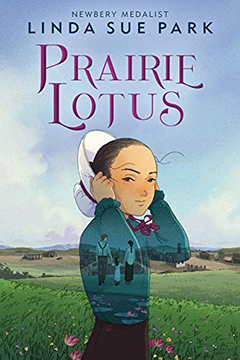